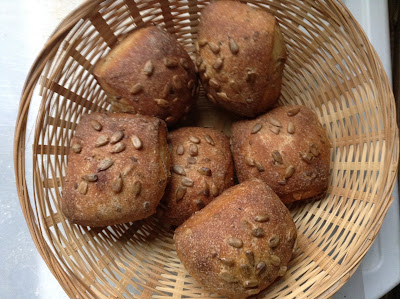 Whenever I'm visiting my hometown Hamburg, I check out new bakeries. Two years ago I noticed people lining up in front of Bäckerei Jochen Gaues, in Eppendorf quarter, where my Mom lives around the corner.

Taking this as a good omen, I joined the waiting line. The shelves full of loaves and rolls looked promising, all with fairly dark crusts - boldly baked, as Ken Forkish ("Flour, Water, Salt and Yeast') would call it. A paradise for crust lovers!

Like Forkish, Jochen Gaues is a purist baker, his breads are made with flour, water, salt and yeast. No dough enhancers, no preservatives, no artificial flavoring. Only sourdough and passion for his craft. And he shared his recipes in a beautiful baking book, too.

His sunflower seed rolls are hearty, crusty and delicious. (I tweaked the recipe a bit, of course, as I always do). The crumb is rather light and more airy than chewy. You can enjoy them with cold cuts, German meat salad, honey or jam.

egg white, mixed with a little bit of water, for brushing
sunflower seeds, for topping


DAY 1
In the morning, mix starter ingredients in small bowl. Leave, covered, at room temperature for 4 - 6 hours, or until it passes the float test (a teaspoonful should float in water).

In second small bowl, stir together soaker ingredients. (This extra step is not absolutely necessary, but hard ingredients like rye chops and flax seeds benefit from longer soaking.)

In the afternoon, mix final dough at low speed until all flour is hydrated, 1 - 2 minutes. Let dough rest 5 minutes, then knead at medium-low speed for 6 minutes. Dough will be soft and sticky, but pull back from sides of bowl.


Transfer dough to lightly oiled work surface. With oiled hands, pat and pull it into a rough square. Fold dough from top and bottom in thirds, like a business letter, then the same way from both sides.

Repeat stretching and folding the dough 3 more times, at 10 minute intervals. It will gain strength and starting to resist. Place dough in oiled container, cover, and refrigerate overnight (a square container helps with shaping later).


DAY 2
Remove dough from fridge 2 hours before using. It should have doubled in volume.

Place dough on a lightly floured work surface, sprinkle with a little flour (it will still be a bit sticky), and gently pull and pat it into a rectangle, then cut into 8 square pieces. Place squares on parchment lined (or perforated) baking sheet.


Brush rolls with egg white, then sprinkle each with sunflower seeds, gently pressing them down to stick. Cover, and proof for about 25 - 30 minutes, or until a finger-poked dimple remains visible. (Since the dough is cut, not shaped, it is puffy and doesn't need to rise much more - basically only until the oven is hot).


Bake rolls for about 20 minutes (rotating them halfway through), or until they are a dark golden brown, and register at least 200ºF/93ºC on an instant read thermometer.


BreadStorm users (also of the free version) can download the formula here. 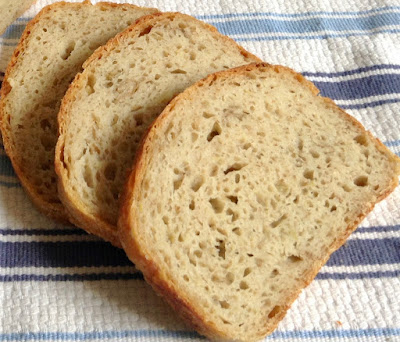 Before my friend "The Rye Baker" Stanley Ginsberg went on his mission promoting European rye breads to American bakers, he had published another remarkable baking book: "Inside the Jewish Bakery - Recipes and Memories from the Golden Age of Jewish Baking".

I was among his test bakers. One of my test recipes was the Polish Potato Bread - Poylner Kartoffelbroyt - with its unusually high potato content an interesting recipe, but, as I soon realized, somewhat challenging in its preparation.


I had problems gauging the necessary water amount, first the dough seemed too dry, then turned sticky from the potatoes.

Not only that: Stanley had warned of dire consequences if you tried taming the gooey dough with more flour - it would turn into a brick!

Somewhat intimidated, I jotted down on my note pad: "No shaping possible".

In the end, somehow, I managed to get the sticky glob into the pan. Or I wouldn't have (later) rejoiced in its "excellent taste!"

At that time I had no whatsoever experience with stickier doughs. Meanwhile, I know better how to deal with the tricky potato bread - the extra flour needs to go on the work surface, under the dough, not into it!


The excellent taste encouraged me to bake the Potato Bread again and again, while tweaking the recipe a little bit, especially withholding some of the water to (slowly) add it during the mixing later.

Allowing the dough to rest in the fridge overnight, I could reduce the amount of yeast a bit.

This favorite loaf really deserves to be presented at Zorra's World Bread Day 2017,


DAY 1
Cook potatoes in about 2 cups of unsalted water until soft, then drain, reserving 170 g/6 oz of the cooking water. Mash potatoes, and let both cool to room temperature.


Mix mashed potatoes, flours, yeast, and 150 g/5 oz of the reserved cooking water at low speed, until all flour is hydrated, 1-2 minutes. (Dough might seem a bit dry at first, but potatoes will add more moisture).


Add salt, and knead at medium-low speed for 10-12 minutes, very slowly adding remaining 20 g/2 oz water. Dough will soon become (and remain) sticky, but in the end pull back from sides of bowl. Don't add more flour, if you don't want to end up with a brick!)

Place dough in oiled container, cover, and place overnight in the fridge. (Using a square container helps with shaping the bread later.)


DAY 2
Remove dough from refrigerator 2 hours before using. It should have doubled in volume, but will still be sticky. Grease a 9 x 5-inch/23 x 13 cm loaf pan.


Transfer dough to a lightly floured work surface. With floured hands (or bench knife), pat and push it into a rough rectangle. Lift one shorter end up and fold it over a little bit, pressing gently down to seal. Continue rolling up dough in the same way into a log.


Re-flour your hands, (or bench knife), and - this is the tricky part - lift the loaf cylinder up and place it, seam-side down, into prepared pan.

Brush top of loaf with oil, cover pan, and proof until top of dough has reached rim of pan, and a dimple, pressed with your finger, will not fill up at once (about 45 - 60 minutes).


Score loaf lengthwise (snipping with scissors works better for sticky a dough than a lamé.)

Bake bread for 20 minutes (no steaming), rotate pan 180 degrees for even browning, and continue to bake for about 20 minutes more, or until loaf is golden brown (internal temperature should be at least 195ºF/90ºC.)


If you like your crust to stay crispier, leave bread in switched-off oven, with door slightly ajar, for an additional 10 minutes to dry. Then turn loaf out onto rack and let it cool completely.

STORAGE: The bread keeps for at least 3 days, wrapped, at room temperature. It, also, freezes well. If you slice it before freezing it, you can take out single slices for toasting.


BreadStorm users (also of the free version) can download the formula here:
Posted by Karin Anderson at 8:38 PM 5 comments: