MY PANTRY - ALL ABOUT YEAST

Fresh yeast, the default yeast for German bakers, is not an ingredient easily found in US stores. Fortunately I always preferred dried yeast - for its convenience and greater reliability - even when I was still living in Germany.

Compared to instant yeast, active dry yeast contains less living cells (but more than fresh yeast), and has to be activated in water before using.

Instant yeast - the equivalent of German Trockenhefe - has the most living yeast cells, and normally can be added to the other ingredients without much ado. Only with some baking methods (like stretch-and-fold) it is better to dissolve it first, since the dough goes into the fridge right after the last fold.

Fresh yeast always has to be mixed into a pre-dough, together with flour, water and sugar, and needs to ferment for about 20 minutes, before it can be added to the dough.

In principle it doesn't matter too much what kind of yeast you use, as long as you follow the instructions on the package. But people usually develop a preference for one or the other.

Some bakers - more prevalent in Germany - consider fresh yeast the holy grail, and look down their noses at everything else.

For example, if a recipe calls for 42 g fresh yeast (frische Hefe), you can use 21 g active dry yeast or 14 g instant yeast (Trockenhefe.)

You can use your calculator - or this neat online yeast conversion tool by Breaducation.

NOTE: In my experience you often don't have to use that much yeast, you might be perfectly fine with less - especially if you don't deal with a rich dough with eggs, milk, butter and sugar.

I always liked rhubarb. It grew abundantly in our garden, and my sister, my two cousins, and I were admonished not to eat it raw - especially not the leaves - in the same way we were told not to bite into the pods of golden chain, monkshood, lily-of-the-valley or foxglove. OR ELSE!

My mother usually cooked rhubarb for compote, to eat with vanilla pudding or quark, but sometimes we bought rhubarb streusel cake, or rhubarb meringue torte from the Konditorei.

The rhubarb plants in our garden in Bar Harbor were hardly visible when we moved into our house. Suffering from years of living in the shadows, malnourishment and crowded out by weeds, they had shrunk to puny proportions, with spindly stems too anorectic to harvest.

My in-laws planted rhubarb in what was, in those days, a sunny patch along the fence, but long since overshadowed by maples and cedars. I didn't even think they were worth the effort of digging and planting them somewhere else, but, at least, I freed them from their suffocating neighbors, and graciously fed them some compost.

In the meantime, some trees have come down, and more light is now reaching these poor plants. They seem to like my grudging care, and look much more vigorous this year (even growing gamely back after some people - I will not name names - dumped a garbage can right on their patch).


Since they are still on the way to recovery, I bought the fat, healthy rhubarb stems for this wonderful cake at Hannaford's.


1. For the crust: using a wooden spoon, mash butter in a bowl, and mix with powdered sugar. Add egg, and mix until completely blended.

2. In second bowl, sift together flour, starch, baking powder and salt. Add to bowl with wet ingredients. Work dough into ball, and then press into a flat disk on plastic wrap. Wrap and refrigerate dough for 30 minutes.

3.  For the rhubarb compote: in sauce pan over medium heat, let sugar caramelize until light brown. Add orange juice (or wine), then rhubarb, and cook for 5 minutes, or until rhubarb is soft and sugar dissolved. In small bowl, dissolve starch in 1 tbsp. cold water (or liqueur). Stir into rhubarb, and let cool.

4. Cut parchment paper to a round, using a 10-inch/26 cm tart form as template (use later with pie weights.)

5. On lightly floured surface, roll out dough to a 11-inch/28 cm round. Place into tart form, pushing dough to sides. Trim excess with knife. Refrigerate for 30 minutes.

7. Cover dough with paper round, then with pie weights (or dried beans.) Bake for 15 minutes, remove pie weights and paper. Continue baking for another 10 minutes. Let tart crust cool (in pan) on wire rack.

8. For the vanilla cream, scrape vanilla bean. Add empty pod and heavy cream to sauce pan and cook until cream is reduced by 1/5th to 14 oz/400 ml. Remove vanilla pod.

10. Let cool for 5 minutes, then stir in mascarpone. Leave to cool, until cream begins to set.


When I first started baking in Maine, I didn't think too much about differences between German and American flours.

All-purpose flour was, obviously, your Average Joe among flours. Bread flour was meant for breads. Duh! And whole wheat and rye flours? Stupid question! Exactly the same as German "Vollkornweizen" and "Roggenmehl".

But then I saw something called "Cake Flour" at Hannaford's. Hm.... a special flour for cake baking, why did you need that? Then there was "White Whole Wheat" - really, white? My chemical alert siren went off! Was it bleached and bromated like some of the flour brands in the baking aisle? (Don't worry, it's a special kind of winter wheat.)

I started wondering about different flour types only, after I had a yearning for German rolls, "Brötchen", and tried out several recipes. Meanwhile I had learned from Peter Reinhart's "Bread Baker's Apprentice" about the merits of slow fermentation, and that steam was needed to create a good crust.

My German Brötchen were not that bad, but something, somehow, wasn't right. The crumb was totally different from what I was used to in Germany. Not kind of loose and fluffy, so that you could easily pull it out, but chewier, with larger pores, more like French bread.


After a while it dawned on me that US-wheat has much more protein than European wheat species . The flour contains significantly more gluten, so that the dough has a more stable structure, and breads rise higher. My German-American rolls were suffering from hyper-gluten-ism!

In The Fresh Loaf (a forum for hobby bakers) I read later that many Americans, interested in baking German Brötchen, were utterly puzzled by this problem.

During a visit in Germany, my friend Ingrid asked me to bake those great baguettes I had gushed about on the phone. I went to the supermarket's baking aisle, and - found myself as clueless as before in Maine!

Never having baked breads in Germany, only cakes, muffins and Christmas cookies. I could only imagine that the German all-purpose flour, Weizenmehl Typ 405, wouldn't be the right thing, and I knew Vollkornweizen (whole wheat). But all the other flour types - what about Typ 550, 1050, 1700?

I had not the slightest idea, and the text on the packages didn't much to enlighten me. The type numbers mean leftover ashes, not protein content, so, if you want to incinerate your flour - this is what you would be left with (along with a dog crazed by the smoke alarm.)

After serious consideration I decided on Typ 1050 - it had to have more gluten than softie flour 405, but the number was far enough from whole wheat flour Typ 1700.

So, what happened? My Pains a l'Ancienne turned out much healthier than planned - after all, they contained a good portion of bran. But even though they were flatter and darker than they should have been, they tasted very good. And that was the main thing.


WHEAT FLOUR TYPES      (approximate equivalents between US and European flours)

*) In Austria there is also another differentiation: the "Griffigkeit" of the flour: griffiges Mehl (Dunst and Feingriess) is coarser than flour, but finer than semolina. You can feel the coarser flour particles between your fingers when you rub it. Doppelgriffiges Mehl (= Dunst) is especially used for fine pastry, pasta and strudel. It has a high content of bran - I would substitute with whole wheat pastry flour or a mixture of pastry/whole wheat pastry. Glattes Mehl (smooth flour) is the equivalent of cake flour.

**) Store bought plain flour can strongly vary in quality, and cheap brands may have less than 10% protein.

Whole spelt you may find in supermarkets with a very good selection or in natural food stores. White spelt you need to mail order from specialty stores. In Germany both are more readily available.

Usually coarser grinds, like rye meal ("Feiner Roggenschrot"), or rye chops ("Grober Roggenschrot") can be only found at specialty flour stores, or some natural food shops.

White rye (a rather bland variety) and medium rye flour you can mail order (King Arthur Flour, NYBakers or Honeyville). Medium rye is very similar to Roggenmehl Typ 1370.  It can be mixed with white rye to substitute the lighter Roggenmehl Typ 1150). 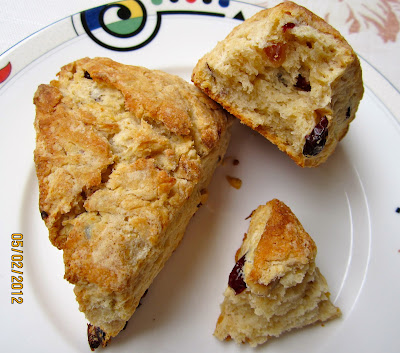 The "Scrumptuous Scones for Hurried People" from the "Weekend Baker" was Hanaâ's Avid Bakers' Challenge for May.

Abby Dodge, the "Weekend Baker", has a heart for people in a hurry who need to whip up a batch of pastry without much ado, perhaps because their beloved in-laws pay a surprise visit, or hubby brings his boss home from work.

Or those like me who, out of the blue sky, feel a sudden craving for something sweet that simply can't be denied.

Following Abby's do-ahead suggestions you can have a basic scone mixture in your pantry, like one of those ready made ones you can buy in the supermarket, only, of course, much better!

And if a pile of over-sized sneakers in your hallway warns you that a hungry horde might raid your fridge at any minute, a "Big-Batch Scone Mix" comes really handy, you only have to add the wet ingredients and your flavoring, and your kitchen is safe!

Since no home invasion was imminent, I made only an individual batch of eight scones.

I changed the basic recipe only in so far that I substituted 84 g of the all-purpose flour with whole wheat, to add a little whole grain - next time I would probably add even more.

The flavoring options left me wondering. Why be a purist and stick with just one add-in? Chocolate or nuts? Nuts or raisins? Cranberries or ginger? Aren't there some perfect combinations?

I decided to stray from the path of recipe purism, and opted for nuts and cranberries. Hazelnuts were a natural choice - I just stocked up on them at Trader Joe's.

The scones turned out very nice, tender, moist and crumbly.

To make the scones
1. Heat the oven to 400 degrees. Line a cookie sheet with parchment or a nonstick baking liner.

2. Combine the flour. Sugar, baking powder, baking soda and salt into a large bowl. Whisk until well blended. Add the chilled butter pieces. Using a pastry blender, cut the butter into the dry ingredients until the butter is the size of peas (about 1/2 – inch).

4. Dump the dough onto a lightly floured surface. Briefly knead the dough to combine and shape it into a 7-inch round. If using the topping, brush the buttermilk or heavy cream evenly over the top of the dough and sprinkle with the sugar.

5. Using a lightly floured knife, cut the dough into 8 equal wedges. Arrange the wedges on the prepared baking sheet, about 2 inches apart. Bake until golden brown and pick inserted in the center of one scone come out clean, about 18 minutes.

SWITCH-INS: instead of the dried cherries and crystallized ginger, choose one of the following:
3/4 cup chopped bitter or semisweet chocolate

OR
3/4 chopped, toasted walnuts or pecans