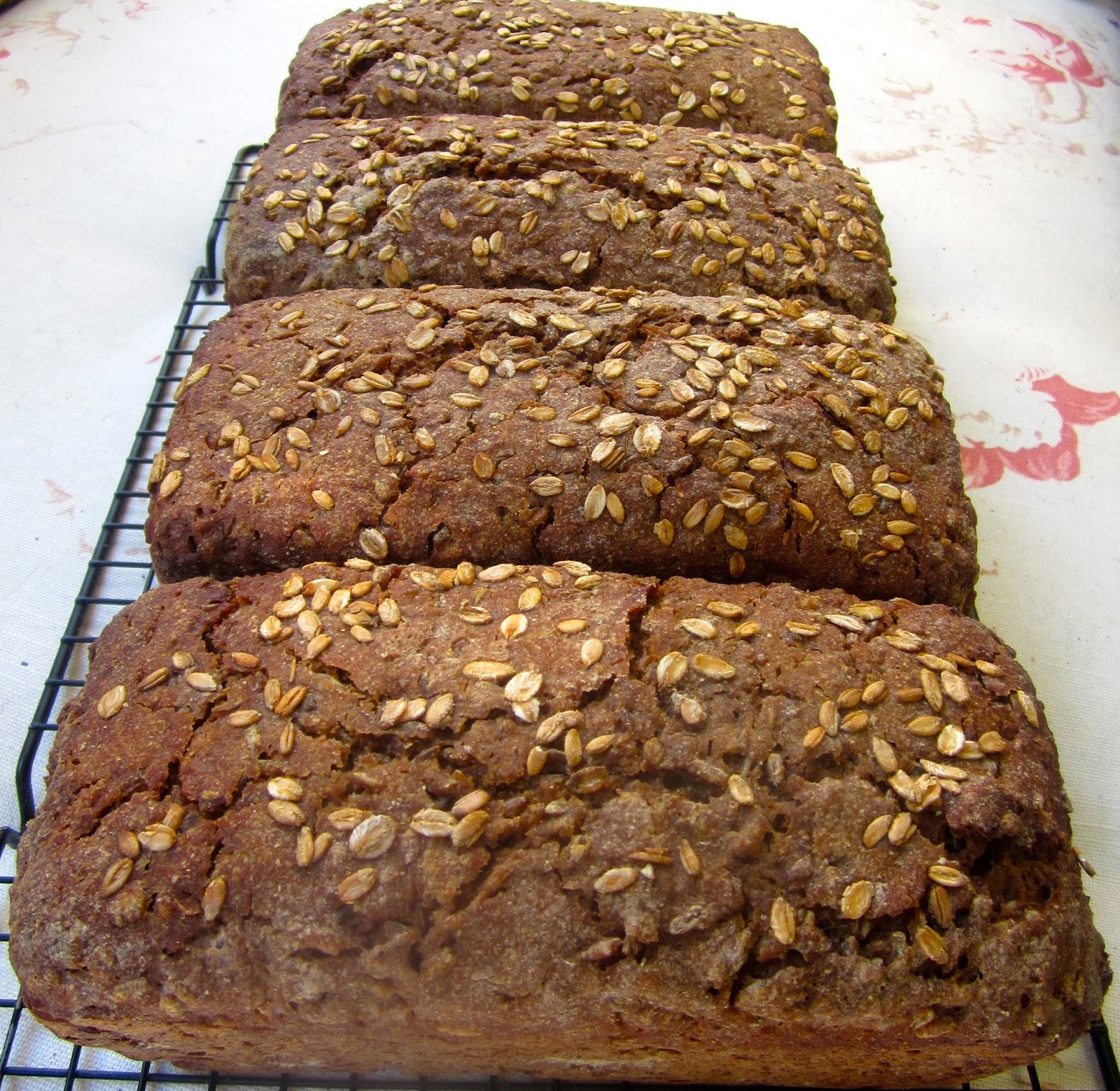 When I started my little home based bakery, I wanted to offer a typical German Schwarzbrot. Though "schwarz" means "black", a Schwarzbrot doesn't have to be a 100% rye bread, only most of the flour should be rye.

With Peter Reinhart's pre-dough method from "Whole Grain Breads" in mind, I cobbled together different recipes into one I could work with. Baking this bread often (my customers love it!) I played with the formula around, and, over the years, tweaked it so much, that it became entirely my own.

It contains whole rye berries, has a little bit of sweetener, but, also, a pleasant natural sweetness, and it is not artificially colored with large amounts of molasses, cocoa, coffee or other additives.

People familiar with my blog know that I'm very much in favor of long fermentation. Breads that are allowed to ripen slowly are much better digestible, and long fermentation reduces the discomfort that gluten may cause for some.


But most important for me - the taste of most breads improves significantly if flavors have more time to develop.

Scarred by my father's strict enforcement of daily Schwarzbrot consumption as a child - "Schwarzbrot macht Wangen rot!" (black bread makes your cheeks red!) was his motto - I never cared too much for dark ryes.

But, overcoming my early Schwarzbrot trauma, I love this hearty, crunchy bread and always bake an extra one for my family, when I make it for my customers. We like it with all kinds of cold cuts,  Fleischsalat (German meat salad) and, also with an aromatic honey. 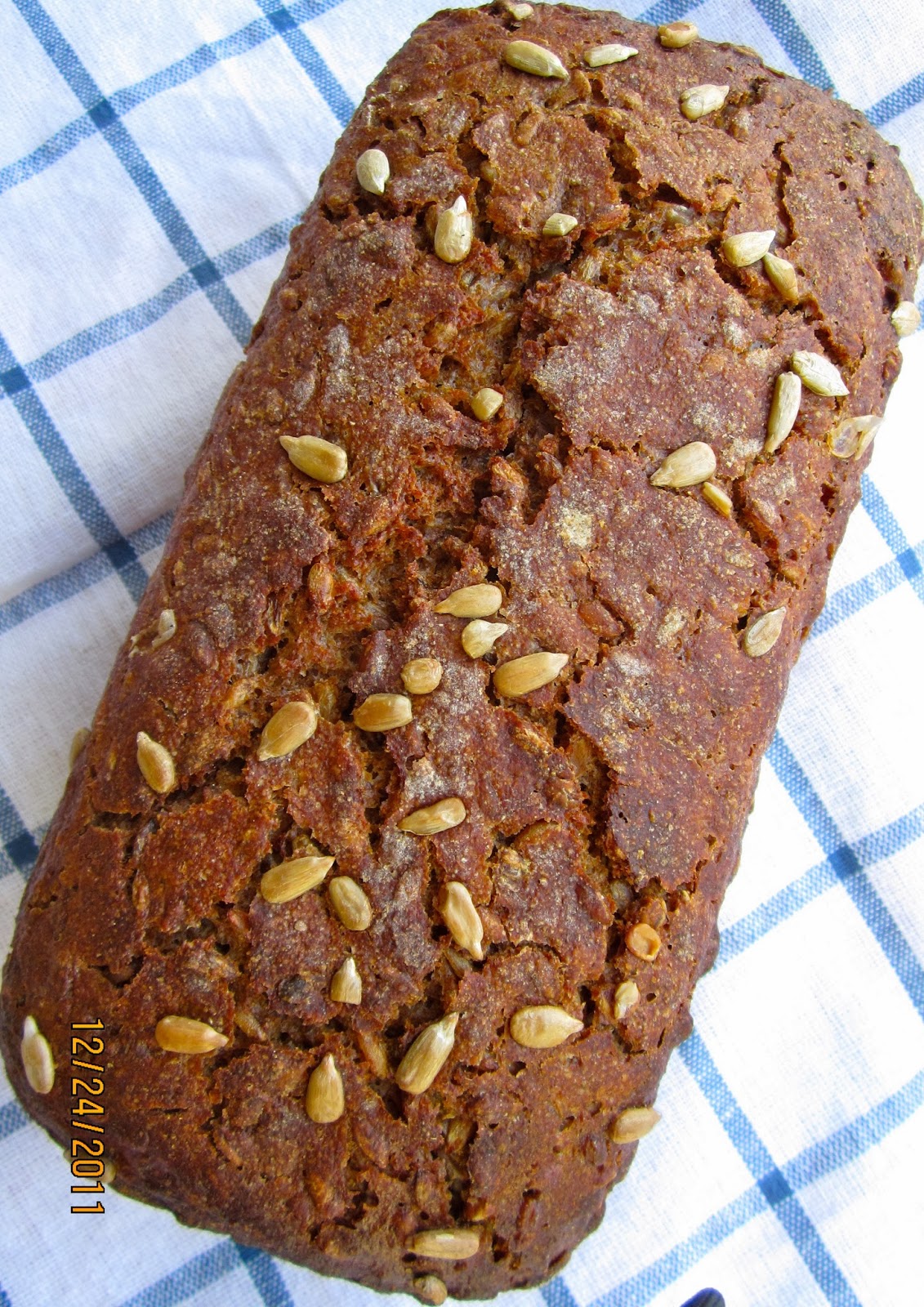 
DAY 2
In the morning, stir together soaker ingredients until all flour is hydrated. Cover with plastic wrap and leave at room temperature.

Combine all starter ingredients until all flour is hydrated, then knead (using stand mixer or wet hands) for 2 minutes. Let rest for 5 minutes, then knead again for 1 minute. Cover with plastic wrap and leave at room temperature.


In the afternoon, drain soaked rye berries and discard water (I use it to water my plants, it contains a lot of nutrients). Place berries in a saucepan, well covered with fresh water, bring to a boil, reduce the heat and simmer for 30 minutes.


In the evening, combine all final dough ingredients in mixer bowl and mix at low speed with paddle for 2 minutes. Continue kneading (paddle or dough hook) at medium-low speed for 4 minutes. Dough will be soft and sticky.


DAY 3
Remove dough from refrigerator 2 hours before using, to warm up.


Transfer dough to a lightly floured work surface. (If you used a square container, it is already pre-shaped.)

Roll dough into a sandwich loaf and place it into the pan, seam side down. Mist with water, sprinkle with rolled rye or sunflower seeds, pressing them a bit down with your hands to attach, then spray with oil.


Place pan in oven, reduce temperature to 425ºF/220ºC and bake it for 35 minutes. Take loaf out of the oven, remove aluminum foil, loosen the sides from pan with a spatula, and turn the half-baked bread out onto a baking sheet.


Return bread to the oven to bake for about 30 minutes longer. It should be crisp, and register at least 200ºF in the center.

Transfer bread to cooling rack, mist with water while hot, and let it cool. For the first 24 hours, keep it in a brown paper bag to allow it to continue drying out and developing flavor. After that, it can be wrapped in aluminum foil. (Don't keep it in the refrigerator!).


BreadStorm users (also the free version) can download the formula:


Ginger (from Ginger & Bread) made a lovely version of this bread: http://gingerandbread.com/2016/01/28/karins-german-schwarzbrot/
Posted by Karin Anderson at 6:48 PM 22 comments: 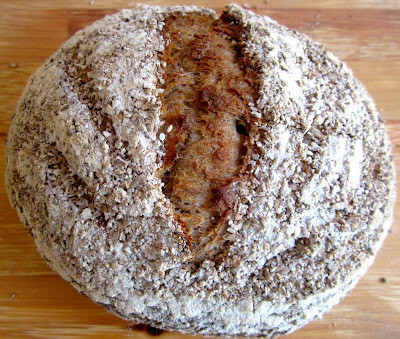 After a rather underwhelming bread experience in an - otherwise nice - hotel last year, I challenged my co-bloggers, facebook friends and hobby bakers from The Fresh Loaf to help fill a basket with "Bread for Götz von Berlichingen", to provide Schlosshotel Götzenburg with a better breakfast choice.

I was so happy with the interesting contributions that I promised myself to bake as many of the 30 breads as possible, and, also, to showcase some of them on my blog - like  Khalid's Götzenburg Bread from Dubai, und Britta's Double Potato Loaf for Götz from the Lower Rhine.

Just in time for Zorra's World Bread Day 2015 I was happy to present Fresh Loaf blogger Dabrownman and his Swabian Potato Bread for Götz of the Iron Fist.


Dabrownman - "everybody calls me Brownman" (or DBM for short) - resides with his wife, college age daughter, and dachshund Lucy in Arizona.

An architect by schooling, he designed and supervised worldwide the construction, and ran the operation of distribution centers for the food industry. "Food and Facilities is what I did the last 23 years".
Meanwhile retired, he threw himself wholeheartedly into bread baking. With 429 posts since 2012, he is one of the most productive hobby bakers and bloggers that I know.

But not only his recipes with their abundance of  grains and seeds are interesting - his posts are also often very funny!

It's hard to believe, but he is proud owner of just one single baking book: Clayton's Complete Book of Breads. ("With a title like that you only need the one.")

Instead of buildings he is now designing and constructing breads, with help of his four legged "apprentice" Lucy, who obviously has a preference for hearty, crusty loaves, and loves being busy in the kitchen.

Just like her "master", Lucy can't stand the idea of baking the same old loaf twice. "It's like designing and building the same building all the time - much too boring!"

With every bread he bakes, Dabrownman feels inspired to try a new, even better loaf. He doesn't really want to waste his time "to bake over old bread. and hope to get the new bread baked!"

According to Lucy, bread baking, also, keeps the retiree too busy to hang out too often in motorcycle bars!!!

DBM swears by freshly milled flour: "It has a more complex flavor, a better, deeper, and more earthy taste. It also is more active in starters and levains".

For his levain he typically takes only a small amount of starter, feeding it in three steps, and then places it for 24 hours in the fridge.

He prefers yeast water over commercial yeast, and often mixes it with his starter.

DBM sifts his whole grain flour, and adds the extracted mineral-rich, coarser parts to his starter - to expedite the fermentation of the levain, and to ensure the hard bits are sufficiently soaked.

"Seems to work well - I have very active levains, and the rise and open crumb are pretty good".


Dabrownman likes Bertinet's dough processing workout, slapping the dough several times forcefully on the countertop. I prefer a gentler approach, and the - less strenous - stretch & fold à la Reinhart that I use for many of my doughs.

Though sifting and extracting the whole grain flour is a bit of an effort, the result is well worth it!

After making it twice, the crusty, hearty bread became one of my favorites (even though my crumb is darker, and not quite as open as DBM's - his extraction might be more efficient.)


PREPARATION  (85% flour extraction)
Mill about 135 g rye (not too finely - Nutrimill setting exactly between "Finer" and "Coarser"). Sift flour several times through a fine mesh strainer, to extract 15% of the coarser parts (about 18 g will be needed). Set aside both extractions separately.

Repeat this extraction procedure with the wheat. Mix the coarser, extracted wheat bits with the same amount of rye bits (a total amount of 35 g are needed for the starter.)

DAY 1
Boil unpeeled potatoes. Reserve potato cooking water, and let it cool (you will need about 250 ml/1 cup.) Potatoes with thin skins don't have to be peeled.

Mix all starter ingredients in a bowl. Cover, and leave overnight at room temperature (9 - 12 hours). It should double.


Mix all dough ingredients. Leave for 30 minutes, then knead at low speed for 8 minutes, adding more water as needed (dough should clear sides, but stick to bottom of bowl).

Transfer dough to a work surface lightly misted with oil or water. With oiled hands, pull and press dough into a rough square, then fold it from top and bottom like a business letter in 3 parts. Fold the same way from both sides.

Gather dough package into a ball, and place, seam side down, in an oiled bowl. Cover, and let rest for 20 minutes, then repeat S & F four more times at 20 minute intervals.

Leave for about 1 hour (dough should look puffed). Generously sprinkle a rising basket with a mixture of wheat and rice flours (to prevent sticking.) For an attractive, rustic look, sprinkle the bottom of the basket with coarse ground or rolled rye or wheat.


Pre-shape dough into a round, then shape it into a boule. Place, seam-side up, in the prepared basket.

Dust the surface with flour, then put the basket in a large plastic bag. Refrigerate for 12 hours (overnight).


DAY 3
Remove bread from refrigerator about 2 hours before baking, it should have almost doubled. If not, allow it to sit longer on the counter.


Preheat oven to 500ºF/260ºC, including baking stone and steaming device.

When the bread is sufficiently proofed (finger poke test: a dimple should not fill completely up again, but remain visible), place it on a parchment lined baking sheet. Score, as desired.

Let bread cool completely on a wire rack before slicing.

BreadStorm users (also the  free version) can download the formula: