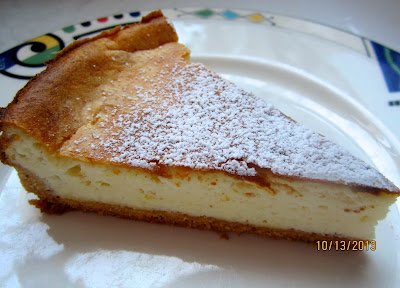 
Americans and Germans have a lot in common. One is their love for cheese cake. Though both pastries taste great, Käsekuchen is distinctly different from its US cousin.

Cheesecake crust is made with cookie crumbs, very practical, and a good recycling of even stale cookies. German Käsekuchen has a short crust, more fuss, but buttery decadence.

The real difference, though, is the filling. American filling, made of mild, more neutral cream cheese, can be varied with many different flavors (like Limoncello-Cheesecake). Käsekuchen is made with quark, a fresh cow milk cheese that is less creamy, more acidic, and contains more water.

Quark (curd cheese), the base for many different types of European pastries and desserts is unfortunately hard to find in the US, or outrageously expensive - and it doesn't taste the same.

Though in desserts quark will be often paired with fruits, German cheese cake bakers tend to purism, the filling might have raisins, and sometimes other fruits, like sour cherries or apples.

Another important difference: German Käsekuchen is notably less heavy and dense than its somewhat massive American counterpart (in spite of the short crust!).

Though I do like American cheese cake with its seemingly endless variations, I love my German Käsekuchen.

But how to re-create it in this sadly quark-less country?

I looked at the traditional recipe in the Mother of German Baking Books (in English: "German Baking Today,) and started with the adaptation process.

By separating and beating egg whites stiff you can make baked goods airier and lighter, I needed more egg white. I didn't want to use heavy cream, because cream cheese is creamy and rich by nature, but one more egg yolk wouldn't hurt.

I also upped the lemon taste - cream cheese is less acidic and, in my opinion, only a lemony Käsekuchen deserves the name.

The result of several cakes worth of testing was finally a "real" German Käsekuchen - my husband's absolute favorite (with cherries).

Mixer: Sift flour and baking powder in mixing bowl, then add other crust ingredients. Knead first at low speed, then increase gradually to medium speed as dough firms up. Knead until smooth.

Or simply process all ingredients in a Food Processor.


Roll out 2/3 of dough over the bottom of a 28 cm/11" (not yet assembled) springform pan (greasing the bottom is not necessary). If the dough sticks to the rolling pin, cover it with plastic foil.

Grease and attach rim. Shape rest of dough into a long rope, adding 1 tbsp. flour if necessary. Press dough rope along the side of the pan to make a rim.

Or, simply, place all the dough in the pan, and press and pat it in place, pushing it up the sides to make a rim.


Bake for 70 - 80 minutes, or until needle comes out clean. Leave cake in switched-off oven, door slightly ajar, to cool slowly, as long as possible.

Käsekuchen tastes even better the next day, and keeps in a cool place for several days.


And if you visit Portland, ME you can even sample my delicious German Käsekuchen: the nice (and authentic) German Restaurant Schulte & Herr serves it, baked from my recipe!

Posted by Karin Anderson at 1:03 PM