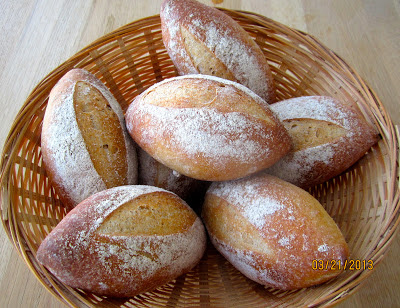 
Gerd Kellner, aka Ketex, is not only an accomplished baker, but, also, writes one of Germany's best bread baking blogs. A book with his recipes: "Rustikale Brote aus deutschen Landen" is available as e-book for Kindle.

When I saw his post on Bauernbrötchen, I wasn't only attracted by the attractive look of these rustic rolls, but, also, intrigued by his use of old dough as leaven.

"Old dough" in bakers' lingo means a piece of dough, cut off before shaping the bread, and kept in the refrigerator for later use. After I learned how to make a wild yeast starter, and bake my first bread from a French cookbook, I had always saved a portion of the dough for my next loaf.

Advancing from a series of weapon grade, dense and chewy "bricks" to more edible breads, this method had worked very well for me, until I branched out and started baking other types of bread than just my everyday German Feinbrot.

The old dough was replaced by a whole wheat mother starter, and all but forgotten as a viable rising agent.

With Ketex' beautiful Bauernbrötchen in mind, I reserved a piece of dough from a yeast bread I made, and put it for later use in my basement refrigerator - and then completely forgot about it!

About 3 months later, when I was looking for something in the depth of the fridge, I came upon the little container, and remembered what it was.

I opened it gingerly, expecting nothing good after all the time, and the old dough, indeed, looked, shall we say, "antique", and didn't smell very nice, either. At least there was no mold on it!

Always curious, and open for experiments before I throw something in the trash, I just wanted to see whether there was any life left in the mummified relic, and proceeded with the recipe.

Though I was rather suspicious about how this might affect the taste, my distrust was unfounded, the rolls, though not looking as nice as Gerd's, rose well and tasted surprisingly good. And I had a new, interesting formula to work with.

For my second bake I did just the opposite: my old dough had slumbered only for 3 days in the fridge. With my first batch of Bauernbrötchen, I had followed Ketex recipe to the t, using a poolish as preferment and adding the piece of preserved dough later to the final mixture.

I didn't quite see the rationale for an additional poolish, especially since the dough was to be retarded in the refrigerator overnight. Why not, instead, feeding the old dough up front, and let it act the part of the poolish?

And, since the percentage of rye flour in the dough was not so high that a change would influence the crumb, I used whole rye instead of medium rye (easy to come by in Germany, but, alas, not readily available in the US.)

Rather than kneading the dough for 15 minutes, and folding it only once, I followed Peter Reinhart's procedure in "Artisan Bread Every Day" (my default S&F) with a brief mix, an autolyse, and 4 stretches and folds over a period of 40 minutes.

Ketex adds a tad of yeast to his dough. For these very small amounts (that, nevertheless, make the rising time more predictable) you need a special scale, able to accurately weigh a few grams.  Mine looks like a big spoon, and is easy to use (about $15 at Amazon)

The second batch, without the poolish, performed just the same, but tasted a bit heartier with the whole rye. I had to adjust the baking temperature and time, but every oven is different, and you have to adapt to this, anyway.

We found these crusty rustic rolls great for open faced sandwiches, and they, toast well, tool. You can easily freeze them, therefore it's worth it to make a double batch.

But don't forget to save a piece of the dough: for your next Bauernbrötchen!

DAY 1:
In the morning, feed old dough with rye flour and water. Cover, and leave at room temperature until lively and bubbly (like poolish.)

In the evening, mix final dough ingredients at low speed (or with wooden spoon) until all flour is hydrated, 1 - 2 minutes. Let dough rest 5 minutes. Then knead at medium-low speed (or by hand) for 2 minutes, adjusting with a little more water or flour if necessary (dough should be a bit sticky.) Continue kneading for another 4 minutes. Dough should be still more sticky than tacky.


Transfer dough to lightly oiled or wet work surface. With oiled or wet hands, pull and stretch it into a rough square. Fold dough from top and bottom in thirds, like a business letter. Then do the same from both sides. Gather dough together in a ball, and place it, seamside down, in a lightly oiled bowl. Cover, and let it rest for 10 minutes.

Repeat this stretching and folding 3 more times, at 10 minute intervals. After the last fold, reserve 100 g/3.5 oz of the dough (for the next "old dough".) Refrigerate reserved piece (container with lid.) (Ketex recommends using it within 10 days, but it keeps longer.

Place remaining dough also in an oiled container with lid, and refrigerate it overnight.


DAY 2:
(Since these are small pieces, you can shape them cold.)

Divide dough into 8 pieces (à 100 g/3.5 oz) and shape them into balls. Let them relax for 20 minutes, then roll them into strands with pointed ends.


Place rolls in a couche, seam side up. Sprinkle with rye flour. Cover, and let proof for 1 - 2 hours. (Preheat oven 45 minutes before baking.)


Place Bauernbrötchen, seam side down, on perforated or parchment lined baking sheet, sprinkle them with whole rye flour, and score lengthwise.

Bake rolls for about 20 - 25 minutes at 450ºF, steaming with a cup of boiling water. (Rotate the baking sheet 180 degrees after half the baking time, and remove the steam pan). They should be golden brown. For a crispier crust, leave them for 5 more minutes in the switched-off oven, with the door slightly ajar. 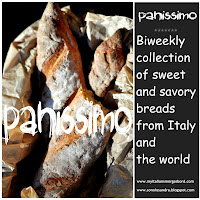 Posted by Karin Anderson at 9:54 PM