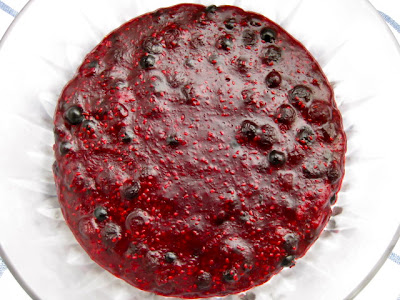 Hot summer days and ripening berries are a sure sign of "Rote Grütze" coming up on my culinary horizon. Rote Grütze (literally translated "red gruel"- sounds awful, I know!) is a fruity, refreshingly tangy dessert, made of at least two (but better more) kinds of red berries. One should be tart, like raspberries, sour cherries, or red or black currants. The others can be strawberries, sweet cherries, blueberries, blackberries - the last two I consider honorary red berries.

Rote Grütze is a traditional dessert of Northern Germany and Denmark (where it's called Røde Grøde). In summer you'll find it on the menu of many restaurants, and every housewife in Hamburg or Esbjerg will serve it to her family, surrounded by whipped or liquid cream, vanilla sauce or vanilla ice cream.

Originally a Northern specialty, Rote Grütze became so popular that it slowly made its way further down to the South. Even conservative Bavarians - who usually poo-poo everything beyond the "weisswurst equator" - don't seem to shun this "Prussian" intruder.

Unfortunately I can't get red or black currants here in Maine - they might harbor a bug that is harmful to white firs. And fresh sour cherries are hard to find, too, only at Trader Joe's or Whole Foods, in Portland.

Therefore I like using a frozen berry mixture, adding fresh berries from the supermarket or street vendors. The use of vanilla pudding powder instead of starch is, also, very convenient. Your thickener comes prepackaged and pre-flavored.

My version is as easy to make as it tastes good. When we have a summer party, it's always a great hit with our guests, we have never any leftovers!

*) Some pudding powders are not sweetened, and some have to be dissolved in hot liquid. In those cases, add more sugar to taste, and mix with hot water. But don't add the milk as per package instructions - you are making Rote Grütze, not regular vanilla pudding!

How to make:
In a small bowl, stir together pudding powder with water, until dissolved and smooth.

In a saucepan, stir together frozen berries with sugar and thaw on low heat. Add fresh berries (except for the 1/4 cup to add later,) and stir until combined.

Remove from heat, and stir in remaining fresh berries and Creme de Cassis (if using). Pour into glass bowl. Let cool down to room temperature, then refrigerate until chilled.

Tip:
If you don't like seeds in the dessert - and don't mind the extra work - puree and strain berries before adding the pudding powder.
Posted by Karin Anderson at 6:08 PM