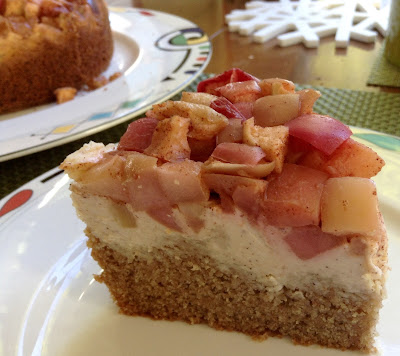 I found the Spiced Apple Cream Cheese Coffee Cake, October project of the ABC-Bakers, very intriguing. Topped with apples, sautéed in butter with cloves, cinnamon and nutmeg - that sounds delicious!

A coffee cake is a bit of a strange concept for a German - aren't all cakes meant to be enjoyed with coffee? And what is a non-coffee cake? To gain more insight, I checked Wikipedia:


"Coffee cake is a common cake or sweet bread.....it is generally intended to be eaten with coffee or tea..... ".

Hm! I can't really say I see any sense in singling out some cakes as suitable pairing for coffee or tea, and others - pies, tortes, bars? - are not.

But wait - here's more: "They are typically single layer cakes.....square, round or ring shaped.... flavored with cinnamon or other spices, nuts, and fruits. These cakes sometimes have a crumb topping called streusel".

Gotcha! This coffee cake is an impostor! Flavored with cinnamon and other spices, yes, but not one, but fancy three layers!

My curiosity satisfied (and feeling good about myself) I went ahead and baked the cake, but couldn't resist the temptation to righteously call it a Not a Coffee Cake :)

Legitimate or not - we loved the cake with its spiced apple topping, soft, but not mushy, resting on a delicately flavored cream cheese layer that kept the cake from getting soggy - even after three days.


For the topping, combine apples, sugar, cinnamon and nutmeg in medium bowl.

Heat butter in large non-stick skillet over medium heat until foam subsides. Add whole cloves (to infuse butter) and then add apple mixture. Cook, stirring often, until they just begin to soften (they shouldn't be mushy), about 3-5 minutes.

Transfer apples back to bowl, discard cloves, and leave to cool.


For the cheesecake layer, beat cream cheese in medium bowl until smooth and creamy (I used a handheld mixer). Add sugar and vanilla extract and beat on medium speed until sugar is mostly dissolved, about 1 minute.

Mix in cinnamon, nutmeg and cloves until combined. Add egg yolk and flour and beat just until incorporated and batter is smooth. Set aside.

In mixer bowl, beat butter with both sugars until fluffy, about 3 minutes. Mix in vanilla until blended. Add egg, and beat until well incorporated, and batter is fluffy, about 30 seconds.

After all milk has been added, beat on medium speed a few seconds to make sure batter is smooth. Then fold in last of the flour mixture with a rubber spatula, until combined.


Transfer cake batter into prepared pan and spread it out evenly. Spoon dollops of cream cheese mixture over cake batter, then gently distribute it with a wet rubber spatula.

Finally, scatter cooled apples in even layer over cream cheese.


Bake until cake is still a bit wobbly in the center, 45-50 minutes.

Transfer cake to wire rack and let cool completely in pan, before removing the ring. 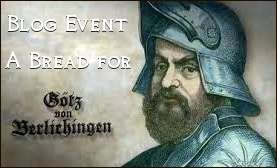